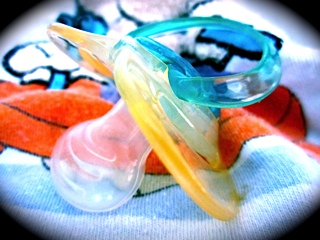 My oldest boy had his first suck on a dummy at two days old.  Just arrived home from hospital, Daddy thought nothing of soothing our crying newborn by giving him a pacifier.  I have to admit, I wasn’t pleased when I saw, and would rather he woke me so I could feed our little one.  But Daddy thought he was doing the right thing by letting me sleep after I had endured a gruelling 42 hour labour.

Afterwards, I did have some difficulty getting baby to feed on the breast, and quickly decided to give the dummy a rest until he was used to breastfeeding.  I felt it was right at about 2 weeks.  Apart from the usual problems of soreness for me, baby then had little difficulty switching between the two.

To be honest though, it wasn’t until I stopped breastfeeding at nine months that my firstborns love affair with the dummy really gained momentum.  I have found the same thing with baby number two.  We introduced the dummy sparingly at two weeks. He too, could take it or leave it (except when going to sleep) until I stopped breastfeeding at 12 months.  Then it was a battle to keep it out of his mouth.  Babies do like to be soothed by a sucking action.  And if your breast is not providing it – then the dummy, or a thumb or fingers will be substituted.  It’s a rare baby that does not need to be soothed in this way.

To give baby a dummy or not is a decision we make usually before baby comes along.  The reasons against are valid and logical.  It is stated by health professionals that:

Faced with this list it is understandable that many parents would be fierce anti-dummy proponents.  But I can tell you, it is very difficult to resist giving in when faced, again, with a screaming baby at 3 o’clock in the morning.  All you desperately want is for him or her (and you) to have some sleep.

I would prefer it if my babies didn’t use a dummy.  But I believe, as with most aspects of parenting, that common sense must prevail.  Babies need to suck on something, and if you don’t provide a dummy, then a thumb, fingers, cloth, toy or blanket will be substituted.  I agree that the arguments listed above can be equally applied to any of these items.  But the advantage at least of dummies is that they are easily cleaned and easily interchangeable.

A dummy calms and soothes a distressed baby.  In my experience, if you follow a few simple steps then using a pacifier need not be a terrible process.  (And it’s nearly always non-parents that look down their noses and infer lazy parenting!)

Lastly.  How to wean your baby/toddler off a dummy.  Here is my advice.
We went ‘cold turkey’ with my eldest when he was two.  I felt he was too old now to need a dummy.  His second birthday was ‘D’ for Dummy day!
Daddy was apprehensive and unbeknownst to me me, had secreted a dummy away in his sock draw.  We never needed it though.  Our son asked several times over the next few days if the bin men had his dummies.  He often explained to others that the bin men had taken his dummies.  But after a week or two he stopped mentioning it.  And he never asked for his dummy.  I have to admit, that I was surprised at how well it went.  But I think success lay in the preparation and the style in which the dummies went.
If you decide to stop using a dummy and your child is younger, I would probably recommend a gradual weaning process. Being younger, they may not comprehend a cold turkey approach.
Whether you decide ‘To Do or Not To Do, remember it is your child’s wellbeing that is the most important, not any grandiose principles that you may hold. 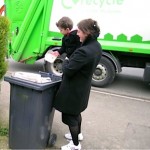 The Dummies go in the bin. 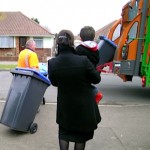 Off they go to the bin truck. 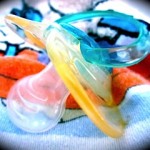 4 thoughts on “Babies for Dummies! Soothers & Pacifiers – To Do or Not To Do…”