This week I was going to be a Norton Storm Pushchair Review as the pram is a little known brand and there isn’t much information or many reviews about it on the internet.  We had it for 12 or so months, bought by my parents as a gift, just before my youngest was born.

Planning to take lots of photographs I decided that this week I had better give it a good cleaning to ready it – the last thing anybody wants to look at in a photo is mashed banana!  Not a very good selling point if the reader was considering purchasing a similar pram.

However, before I could organise myself,  it was stolen – from right under the noses of my son’s nursery staff.  They were in no way at fault.  The pram had been parked in the designated buggy park area in front of the nursery behind a fence.  The nursery is on a road that gets a lot of foot traffic, and I guess some awful person spied it as they walked past and thought – ‘that’s a nice pram, I’ll be having that’ and furtively scurrying in behind the fence like a rat (I imagine), stole it.

Does a thief think or care of the hurt they inflict when they steal that which does not belong to them?  Would they hesitate if they knew that the pram had been a gift from my parents and how upset and angry we all are that such a thing has happened?

Unfortunately I think not.  All the thief is worried about is making a quick quid and the danger of getting caught.  Uncaring about insurance claims (that is if it can be claimed), or the hundreds of pounds that the pram cost – which will have to be forked out again to purchase a replacement – I am sure they would sneer or insult if confronted.  I do wonder if they are dumb enough to actually use the pram about our small town.  My 5 year old is on constant pram surveillance – having been overawed at the trip to the police station to report its theft.

Angry as I was, and upset as I am, all I can do now is say a few words in parting to my lovely pram that I will miss and would recommend.

It was a Norton Storm Pushchair in Black Magic.  A fantastic looking pram with a light aluminium frame, it had an extending handle (great as I am over 6ft) and a seat that was able to be parent (rear) facing or forward facing.  Any pram I have now must be rear facing.  The pram we had bought for my eldest had not been, and an incident when a stranger informed me that my baby son was silently choking scared me half to death and I swore I would only have rear facing prams from then on.  Such a good idea as at all times baby can see you and you them.

The pram comes with a complete travel system:

The reason I went with this pram instead of the iCandy Cherry, which is the other pram I was contemplating purchasing, is the guarantee, which is two years as opposed to the one year on the iCandy.  Also, the Norton had sprung front wheels, which the iCandy doesn’t (the springs on the iCandy are for show only).  It was also a little more competitively priced – which is always a consideration for most parents.

I had been lucky enough to compare the prams side by side at the Earls Court Baby Show which is always a good place to go if you want to see all the leading pram and pushchair manufacturers together under one roof.  And you can usually pick up some good deals as well.

But back to the pram!  There were only two suggestions that I would pass on to the manufacturers.

Also I would consider the following when purchasing:

Would I recommend this pram?  Yes I would.  It was smart looking, comfortable and light.  Would I recommend getting a bicycle lock to secure it?  Yes I most definitely would.  I miss my Norton.  Every time I see the rain cover, or the cosy toes, or use the pram bag around the house I think of it and curse the thief.

I believe in karma.

So watch out thief.

Please excuse the stock photos – as explained above – too late now to take my own photos! 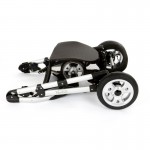 Folded down. Seat must be removed and is not shown. 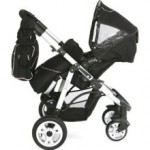 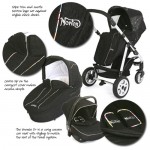 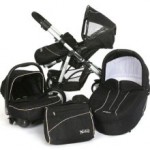 Subscribe to receive my posts by email and never miss out on a single post. (See Right Hand Menu).

If you enjoyed this post you will also enjoy:
I Killed Lightning McQueen – A Tale Of Heartbreak And Tears