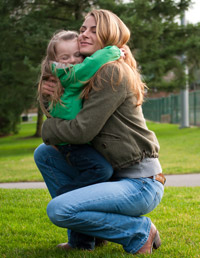 Should you let your child play unsupervised? Allow her to walk to school alone? In this age of information overload, parenting advice is everywhere. Go online and you’ll find a tidal wave of tips aimed at helping you raise your kids. But what is it that they really need?
Above all else, children need common sense from their parents. Childhood has become “a pressure-packed preadulthood,” says Edward M. Hallowell, PhD, author of The Childhood Roots of Adult Happiness: Five Steps to Help Kids Create and Sustain Lifelong Joy. “Kids are trying to make partner in the first grade.” It’s not that their parents don’t love them; they’ve just confused raising children with turning out perfect products. Instead, he says, parents should focus on making their children feel connected to their family and their community, and success (and everything else) will follow.

Of course you love your kids. But do you remember to tell them? “I never knew a kid whose parents told him too many times that they loved him,” says Laurence Steinberg, MD, a psychology professor at Temple University and author of The 10 Basic Principles of Good Parenting. And it’s more than just the words: It’s consistently showing them interest, affection and concern. That’s why Odette D’Aniello of Tacoma, Washington, makes sure every morning to offer her young children “special love.”
“I sit down and I cradle each one, wrap him or her with a warm blanket and softly scratch their back while chatting about random stuff, and telling them how lucky I am to have them,” she says. But for many parents—especially as kids get older, busier and less communicative—telling them how you feel can be more easily expressed through actions.
Louise Morgenstern of Santa Monica, California, shows her three teens love by getting to know their friends. She even keeps a gallon of mint chocolate chip ice cream in the freezer—for her son’s best friend. “It’s his favorite flavor, and he comes into the house, goes right to the freezer and scoops himself a bowl,” she says. “With teenagers, it’s not about telling them you love them but showing them you know what they care about. At that age, it’s their friends.”

Have you ever been in a restaurant where the child at the next table is simply out of control, throwing things or refusing to stay seated? You watch as the indifferent parents ignore her behavior and you wonder, What’s going on?
“American parents err on the side of leniency compared with parents from most other parts of the world,” says Dr. Steinberg. “In the last generation or two, there has been a blurring of boundaries between U.S. parents and their children, and it makes parents more reluctant to impose their authority.
“Parents too often fear that their children will be angry with them if they try to discipline them.” But the anger is only temporary, and besides, it’s the parents’ job to teach their child, not befriend him. “The rules you make when your child is young ultimately become the ones he or she will live by,” says Dr. Steinberg.
Boundaries actually make kids more confident, says Lenore Skenazy, author of Free-Range Kids: How to Raise Safe, Self-Reliant Children (Without Going Nuts with Worry). “That’s what gives kids the reassurance to try things. Say you’re at the beach, and you tell your child she can only go so far into the water. If she knows going this far is OK, then she can frolic with abandon in that area without wondering, ‘Are there sharks here?’” Think of discipline as the strength of parenting: You can show your kids where the “sharks” are and where they’re not.

On their way to registration for her daughter’s ninth year of piano lessons, Maureen Anderson of Detroit Lakes, Minnesota, asked Katie, 14, a simple question: “What do you like about taking piano?”
“Being able to say I haven’t quit,” Katie said.
“What don’t you like about it?” her surprised mom then asked.
“Practicing. Lessons. And the recitals.” Basically everything. When they got to the music school, instead of registering for more lessons, Katie unregistered for piano. “I learned what Katie thought by asking a couple of questions and listening to the answers,” Maureen says.
Take the time to really “hear” your kids, because that will make them more likely to talk to you regularly. “A lot of parents rush to solve things for their children,” says Casey Decola, MSW, a counselor with the Rye Youth Council in Rye, New York. “Especially with teenagers, we tend to panic. We say, ‘You know what you should do?’ and then we tell them, instead of listening and allowing them to fully get out what they’re trying to say without judging it.”
Instead of offering advice, ask questions that can help them come to conclusions on their own. “Make eye contact. Sit with your kids and give them the respect of listening in a way they deserve,” Decola says.
But how do you get your child to talk? “It’s normal for adolescents to want more privacy than they did as children,” says Dr. Steinberg. “But if parents engage their teens in genuine, interested (and interesting) conversation, the kids will talk. The problem is, too many parents ask perfunctory questions like ‘How was school today?’ or equate talking with lecturing.”
And keep in mind that to get the dialogue going at all, you first need to be around. So schedule a regular walk or board game to give you uninterrupted time together.

Have you had a moment today where you really connected with your child? Did you share a joke, a hug or a game of catch? It’s easy to go through the day telling your child what to do and never fully engaging with each other. When kids feel connected to you, they learn that they’re connected to people outside the family, and that the way they act has an effect on others. “Feeling like you have a place in the world and people who support you leads to happiness in adulthood,” Dr. Hallowell says.
Connectedness should happen naturally in everyday life. “A family dinner, car trip or regular activity can be a shared joy that leaves you feeling close,” he says. “A lot of parents approach parenting as drudgery, a job that’s a lot of work. What parents and kids need to feel connected to one another is to have fun. Sometimes that can mean doing nothing, but doing it comfortably together.”
So plan family activities, shared challenges, even regular dinners to reclaim a sense of fun and joy. Research has shown that children brought up this way are more socially skilled, have a better self-image and think of home as their haven when things go wrong.

“The loss of free, undirected play is the biggest loss in modern childhood,” declares Michael Thompson, PhD, author of The Pressured Child: Freeing Our Kids from Performance Overdrive and Helping Them Find Success in School and Life. “Kids need time away from their parents to just play.” And it’s not just because kids enjoy play—it actually helps their brains develop properly.
Play is the driving force of childhood, says Stuart Brown, MD, author of Play: How It Shapes the Brain, Opens the Imagination and Invigorates the Soul. That’s because it helps kids discover their talents and their resourcefulness, and hones their abilities to problemsolve and get along with others. Play exercises their imagination and stretches their creativity, while allowing them to try and fail at things in private without judgment. All of this helps them do better in school, says Dr. Brown, because kids who play have nimble minds and can look at things from different sides.
The next time you’re thinking of signing up kids for an activity, first think about whether or not they’ve got enough time each week to just hang out and let their imagination guide them.

When New York City mom Lenore Skenazy wrote in The New York Sun about letting her 9-year-old son take a subway home by himself, she was vilified in the press and blogosphere as “America’s worst mom.” She has since become an advocate of giving kids more independence and writes about it in her book and blog, FreeRangeKids.com.
“The way many people parent today does not prepare kids for adulthood,” Skenazy says. “We wait for them, cheer for their every move, take them to soccer, dance and every other lesson—and we take away their chance to do things on their own.” Her decision to let her son ride the subway came only after years of navigating the subway together and they both felt confident that he could find his way.
Doing things independently is very important for a child, says Dr. Steinberg, because children feel confident when they feel competent. So letting him go to the store by himself or walk to town tells him you believe in him. The same confidence emerges when a child completes his own science fair or other school project. Of course, help him collect the materials and ask him questions that will guide him to its completion, but let it be his. So what if it doesn’t look as put-togetherk as the other parentinfluenced designs? Your child will feel satisfied knowing that he has produced something on his own.

“Today’s kids have too many toys,” says Dr. Thompson. This teaches kids to always look for “the next new thing” instead of enjoying what they have. “If they’re always looking to material things to entertain themselves, they’ll soon get bored,” he says.
It’s easy to substitute toys for affection and attention because “it takes only a little time to buy your child a toy, but much more time to spend an afternoon together doing something fun,” says Dr. Steinberg. “But ultimately, it’s time spent together that will lead to happier kids.”